Adonia: Hello! I’m here at an old GSD site called Fannin Campus (no longer existed anymore). I’m standing behind the old building which, in old days, was Vocational Department. But why am I here standing behind the old vocational building? Look behind me. Somewhere in the woods, a long time ago, there used to be a small hut [image shown] but it has long since torn down and gone now. What is it so special about that hut? Let me explain.

Adonia: Years ago scouting is “the big thing.” The hut (actually a scout hut) was built in honor of the young Deaf man named William Jesse McCanless [image shown], or “Bill.” What was his name sign? I will show you a video of his name sign, as demonstrated by a Deaf woman, who was nearly 100 years old at that time of filming and passed away not long time ago. She was also an alumni of GSD. She knew him, so you can see her for yourself. [Video shown]. See his name sign? Interesting!

Adonia: But what did William Jesse McCanless has to do with GSD here? Actually his home was in Canton, Georgia! Canton is pretty way north of Atlanta. He went to Maryland School for the Deaf as a student. [Image shown] He graduated from Maryland School for the Deaf in 1925. [Image shown] He then went to Gallaudet University, but his health problems forced him to leave early. He returned to Maryland School for the Deaf and took up the job as a Dorm supervisor as well as participated in scouting. He established a troop (whose number is #1) at the Maryland school for the Deaf. He also traveled a lot between Maryland and Georgia. He eventually graduated from Gallaudet in 1930 and traveled to two very significient events. First, He went to Hungary and participated in World Boy Scout Jamboree for training and networking with other boy scout troops. It was in 1933. The second event was National Boy Scout Jamboree in Washington state there. That’s where US President Roosevelt visited the Boy Scouts there (in 1937)! A representative of each scout troops was in the attendance, and William J. McCanlass was one of the representatives.

Adonia: Wiliam J. MCanlass also received three awards. The first was Eagle Badge; the second was Palm award; and the last one was the Scoutmaster’s Key. He earned the Eagle Badge when he was a student at Maryland School for the Deaf. The record shows he was the first Deaf student to earn that! The Scoutmaster’s Key was the highest award that, according to the history, was earned by the only two high-ranking Deaf scout leaders in the entire US, McCanless being one of the recipients!

Adonia: Here’s an interesting story; McCanless also taught scouting skills right here on the GSD campus, which is why the scout hut was built. During that time he was at GSD, he awarded a badge to a very well-known and honored young man who was a student of GSD (and later became a teacher at the same school, under the vocational program for many years). His name was Connor Dillard (demonstrates name sign)! Amazing. I have already met Connor Dillard in person; to know he had met McCanless…just amazing! Such important connection through generations. Yes, role models are very important! Not only Deaf but also hearing people here and around in places like Cave Spring, Rome and other cities who wanted to become scouts learned from McCanless. Also in his hometown in Canton, GA., hearing scouts also learned under his leadership, too!

Adonia: McCanless deeply loved scouting. As I have said earlier, scouting is “the big thing” years ago as it is today. Sadly, he passed away pretty young (he was only 37 years old) at his home in Canton, GA. That is why GSD honored him by naming the scout hut after him…”William Jesse McCanless (“Bill”) Scout Hut”. [Image of a clipping is shown].

Photos credit: GSD Museum and Bjorlee Museum at Maryland School for the Deaf 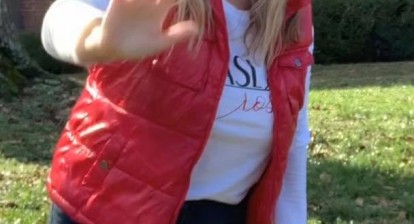 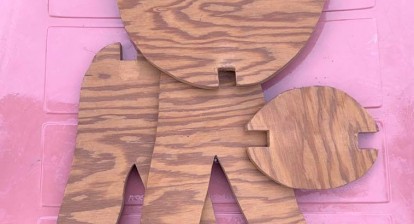 My Project From My Wood Classes at GSD
February 6, 2020
Why We Need National Deaf Schools Museum
June 2, 2019