One of only four documented Americans who was taught by Laurent Clerc at Paris (France) Deaf School! ♥️

The name of cemetery is Cusseta City Cemetery in Cusseta, Alabama.

[Video Transcript]
Adonia: Hi, I am here in Cusseta, Alabama cemetery. I do not know if you can see or read this tombstone, but it says his name is Marcus A. Flournoy. Who is he? He was an older brother of John J. Flournoy (JJF), being ten years older than JJF. You remember John Flournoy was the one who proposed an idea to establish GSD in 1833, but was ignored because he was Deaf. His brother, Marcus A. Flournoy, was just as important because he was one of four students who had been documented to prove they were actually the students of Laurent Clerc at Paris Deaf School (notice that it was not American School for the Deaf in Hartford, but a Deaf school IN Paris, France!) Imagine, Marcus was one of only four Americans who were documented as being taught by Laurent Clerc in Paris,France! Yes, that was HIM (pointing at his tombstone). It is hard to see/read because of the strong sunshine. Marcus was important because he knew several signed languages. So hats off to him for sharing and passing on the knowledge of the signed languages to JJF, his younger brother. So, there you are – that’s Marcus! 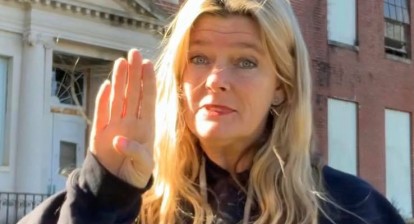